you spin with the rings of Saturn
and twirl around the stars when they combust
you catch wisps of their memories
as they die having witnessed centuries
and use them greedily as you
scribble your poems, unconscious of yourself.

There’s this gullak in my brother’s room. It’s made of rough brown clay, unvarnished, pink and blue flowers painted on it. The slit in it is hardly wide enough to slide a coin in. I wonder who made it. Who was the potter? Was it an old, withered man with permanently muddy fingernails and a family to support? Or was it a young amateur boy looking to earn some roti for his orphaned siblings? It could be an old potter’s little boy, continuing the family profession and carrying on the legacy. The gullak has an imperfectly embossed bottom half. Whoever made it, is he still alive? Or maybe it was a she. Maybe it was a woman with soft, unaccustomed hands trying to shape the gullak, her first gullak, because she needed the money to buy rice she could boil for her baby who needed to start on chewy food. I wish we had the power to touch an object and be able to see who sweated to create it. It would make us so much more grateful.

There’s almost always an empty mug on my side table. I drink tea twice or thrice a day and then forget to pick up the mug. And it’s always a mug. I can’t drink in cups. They’re too small. And the tea can never have too much sugar. It makes my head spin. The mug is usually blue. Blue happens to be my favourite colour- along with dark green, bright yellow, and orange. I don’t really believe in favourites. I like all colours in different shades and contexts. When I was young, I hated pink and everything girly. I scorned at every girlish activity which people expected me to take part in. I rebelled against almost everything my elder sister liked. Now, pink fills up at least quarter of my wardrobe. I find I’m interested in jewellery, pretty clothes, bangles, knitting, cosmetics, and even cooking to an extent. But I’m most interested in writing and reading and the question of identity. A friend asked me a few days back, why are you so obsessed with identity? (The question of identity in Pakistani novels happens to be my research topic this semester, and I have a related topic in mind for my dissertation too, hence the question) So I found myself telling her about my imagination games in my childhood. My cousin and I used to talk for hours on the phone, sharing our “imaginations”. We had whole imaginary worlds made up in which such interesting things used to happen. They were more exciting and more fulfilling and perhaps more distressing than our real lives. I suppose everyone has these imaginary worlds with imaginary friends and even foes. Mine had a huge all-encompassing organization which used to authorize and facilitate numerous identities for one person. The bathroom mirrors were the operational screens for this organization. It was a whole complicated world. I had many different identities. And then in that imaginary world, it eventually got too difficult to manage all identities. So I killed off one, gave retirement to another, imprisoned another eternally, and had one married off and away. A few just vanished on their own as my interest in them dissipated. Perhaps that is the root of my obsession. Perhaps it goes deeper.

They say decentralization is one of the key themes of the postmodern world. We have no centre anymore since denouncing God has become a popular trend. Everything else that tries to be the centre fails. There’s a problem in everything. I’d say having so many problems with every problem too is a key theme of postmodernism. It’s a strange thing, this postmodern era. Everything is fragmented and disconnected. The means to find connection too are disconnected to no end. We float, our ideas float, our problems and their solutions float, all looking to find a centre when the centre never vanished.

It blows its frosty breath
and holds its silver sceptre
the knob glows with its latest kill.

(Soft departure is only soft to the onlookers.)

(Cold storage is cold to everyone.)

It uses full stops as its only punctuation
and knows no hyphens
definitely no semi-colons.

(It’s probably selfish of me to cry when she’s out of pain at least.)

The black guest was treated
with pained sighs and resigned murmurs
which no-one should write about.

(For we don’t know how to feel; grateful for her release from pain, or plain morose at losing a beloved.)

Is it selfish, tell me death,
to grieve a loss significant
or should we celebrate?

(I wonder if death knows bereavement.)

The angel of death was sad about his duties
and God told him He would create excuses
for people to blame, instead of the angel.

(I am not blaming either the angel or the excuse. I am merely mourning.)

Pray for my nano, everyone.

The dictionary defines a void in several ways. The most fitting being “a completely empty space”. How does a void feel? It feels like a million holes drilled into your being, your soul and heart and mind and organs (and for me, especially my eyes and feet). It feels like this filling heaviness which makes you drowsy and keeps jolting you awake too. It feels like those holes are overflowing with black substance ( I feel we’re unfair to poor black, it never did any harm but always has negative connotations). It feels like… depression, perhaps? But not the clinical depression. And it always leaves you wanting more of everything. Perhaps not in a materialistic way ( personally, I always want more food, more stationary, more time, more contact, more words, more books, more leaves and more stones).

This void… How is it so completely empty and full a the same time? It’s full of emptiness. But the moment you prostrate, the moment your forehead touches the ground, the moment your soul turns back, trust me, you’ll find the void gratified. For that moment, it ceases to exist. It’s like Mrs. Ramsay’s moment of clarity and certainty. But better. And it doesn’t have to be fleeting.

If you feel a void inside you, touch your forehead to the ground and talk to Him. He’ll respond no matter how long it’s been.

Introducing, awesomesauce Maria Imran. And her amazing photography along with an equally amazing piece of poetry! I could almost breathe in Nathiagali. 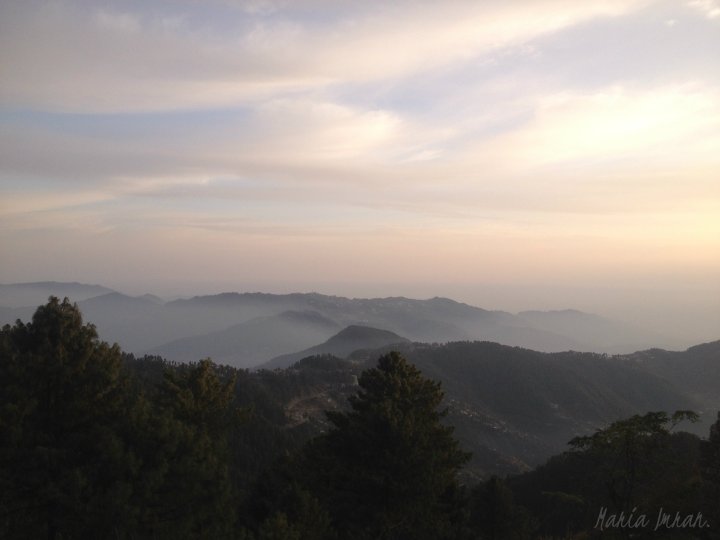 Took this on my return route from Nathiagali, Pakistan. Got inspired by the daily post’s challenge to share it because this trip meant all sorts of magic to me.

There’s a picture on the mantel
A picture that I love
Of you and me together
Twenty years afore.

It was taken in our hometown
Afront that crazy, little barn
The one we painted red
To make our world glow warm.

The barn is no more, the red is gone
The world is cold, and we are old
But the picture on the mantel
Is a worthy story told.

Everything evolves, sometimes into nothingness, and sometimes into expansive energy which holds power to bring a million dreams to life. Within that process of evolution is a dark period: one in which little light enters, always to be consumed by the darkness. But if we can hold on to that little bit of light, cling to it and climb it like a rope till we can get hold of all that light, well then that energy tantamount a golden wand of granting wishes is ours to claim.

We’re in that dark period. Perhaps all humans are at this age, but WE are in this dark period. Frustrations, greyness, exhaustion, despair, hopelessness, unsettling uncertainty which looms over every single thing; it makes us doubt our very being. We’re alive, we’re not very conscious. We’re awake, we’re not really conscious. We’re breathing, we’re just not really conscious. You without me, me without you, you uncertain of me and me of you, or not of each other but of fate. And of course, fate is something to be uncertain of. It’s that fireball which could either set you on fire and burn you to ashes or set you on fire and light you up into a likeness of a celestial being.

Such a pity, this dark period. Such a pity. You and me, we try to turn it into words; dark words, curling in on themselves, hiding a depth of meanings, curling, curling, curling, like that snake which suffocates. And within those words we lose parts of ourselves and we don’t realize it. Years later, we’ll look at these, gather those scattered parts and hold them close to our hearts. Years later, when hopefully we will have reached that light. Years later when hopefully we will have grabbed hold of that expansive energy and turned it into…. I don’t know what. You tell me. 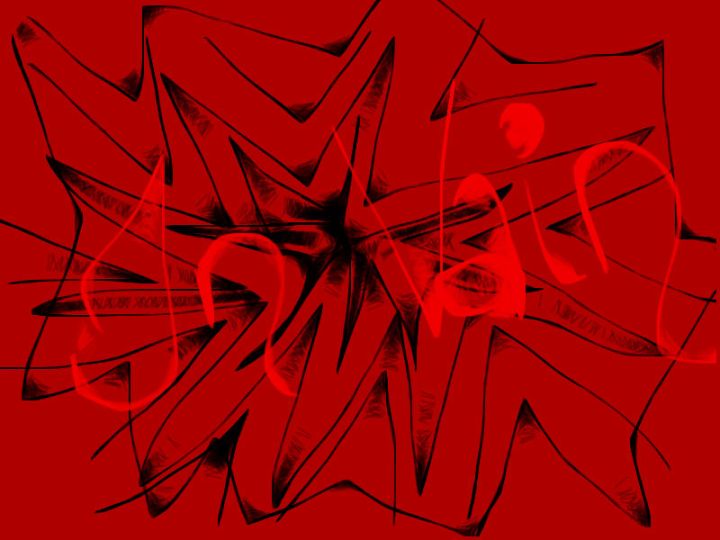 Naive little water drops never knew
What they were, what they could do
Upon their downfall they saw the sun
The sun shone bright and magic spun
A band of colours poured from the drops
Exquisite scenery high above the crops
Bright old sun had till then just burned
It saw then the rainbow the drops had churned
It saw its own reflection in the colours that appeared
It saw itself caring when it had never cared
It made the water shine when it fell from its height
It showed the drops too their very own might
Dear old sun makes rainbows everyday
It still burns and still makes the drops gay
The water never fears and takes on the fates
As long as the sun shines, a rainbow awaits.
~Moniba.

The Ordinary Girl's Peculiar Blog by Moniba Mehboob is licensed under a Creative Commons Attribution-NonCommercial-NoDerivs 3.0 Unported License.
Permissions beyond the scope of this license may be available at moniba.meh@gmail.com.

The Ordinary Girl's Peculiar Blog by Moniba Mehboob is licensed under a Creative Commons Attribution-NonCommercial-NoDerivs 3.0 Unported License.
Permissions beyond the scope of this license may be available at moniba.meh@gmail.com.